WHO IS BAJRANG PUNIA

After winning his first international gold, Bajrang Punia said that he and his family were so happy that they could barely sleep for two days.

Bajrang Punia was born on February 26, 1994, in the Khudan village of Jhajjar district in Haryana. Punia begin wrestling at the age of seven and was encouraged to pursue the sport by his father. However, he grew up in rural area. His family was not financly stable so they did not have money for traditional sports. Instead, punia had to partake in free sports like wrestling and Kabaddi. he started his wrestling career at the age of Seven. Bajrang Punia’s Father was a wrestler as well. When punia was young, he skipped school to practice wrestling. Punia went to chattarsal stadium for wrestling practice. There he was practicing wrestling under the guidance of Ramphal Mann. In 2015 his family moved to Sonipat so that he could attend a regional center of the Sports Authority of India(SAI).

Bajrang is the youngest child of Balvan Singh Punia and Om Pyari Punia. His elder brother name is Harendra Punia. He has a nephew named Naman Punia. Bajrang Punia is married to fellow wrestler Sangita Phogat. Being a fellow wrestler, it was in a quiet ceremony in Balali village, Haryana, on Wednesday, November 25, 2020. He announce his wedding On Instagram, There he quot about his wedding,

“Today, I have chosen my life partner, and it feels like I have gained another family. I am starting a new chapter in my life, and I am both happy and excited for the journey ahead. Thank you for your love and wishes.”

His first tournament was on 2013 Asian Wrestling Championships in New Delhi. By winning the bronze medal in the men’s freestyle 60 kg category. It was the start of his career where he went on to win awards for India in various wrestling championships, including the Commonwealth Games, Asian Games, and several national and international tournaments.

Here Are the lists of the Games he Played.

He faced Shogo Maeda of Japan, in the round of 16, 3-1 victory over him Morad Hassan of Iran was his quarter-final opponent, whom he defeated 3-1 to get to the semi-finals.

After qualifying via the repechage round, Bajrang took bronze in the men’s freestyle 60 kg event in Budapest, Hungary. Mongolian Enkhsaikhany Nyam-Ochir was defeated 9-2 by him.

In the round of 32, he faced Bulgarian Vladimir Dubov, who defeated him 7-0. Bajrang then faced Shogo Maeda of Japan and received a walkover after the Bulgarian grappler qualified for the final. Bajrang’s next opponent was Romania’s Ivan Guidea, who he defeated 10-3 to earn a position in the bronze medal match.

He took silver in the men’s freestyle 61 kg division in Glasgow, Scotland, after losing 1-4 to David Tremblay of Canada.

Bajrang defeated Sasha Madyarchyk of England 4-0 in the round of 16. In the quarter-finals, he defeated South African Marco Plaatjies 4-1. In the semi-finals, he faced Nigerian wrestler Amas Daniel, who he defeated by a score of 3-1.

He took silver in the Men’s freestyle 61 kg division at Incheon, South Korea, after losing 1-3 to Masoud Esmaeilpoorjouybari of Iran.

He defeated Mongolia’s Tuvshintulga Tumenbileg 3-1 in the round of 16. Farkhodi Usmonzoda of Tajikistan was his quarter-final opponent, whom he defeated 4-1 to go to the semi-finals. When he overcame Noriyuki Takatsuka of Japan 4-1 in the semi-finals, he was assured of a medal.

Unlike his fellow Narsingh Yadav, Bajrang couldn’t win a medal at the tournament in Las Vegas and finished 5th.

In the round of 32, he faced Mongolian Batboldyn Nomin, who defeated him 10-0. Bajrang qualified for the Repêchage round after the Mongolian qualified for the last battle in the 61 kg category. In the repêchage round, he faced Reece Humphrey of the United States, whom he comfortably defeated 6-0. Beka Lomtadze of Georgia was the second repêchage opponent, who put up a good fight but lost 13-6 to the Indian. He was defeated at the final hurdle, drawing the bronze medal battle 6-6, but his opponent, Vasyl Shuptar of Ukraine, had earned the previous point.

In May 2017, he won a gold medal at the Asian Wrestling Championship held in Delhi.

In the New Delhi auction, Bajrang was the second JSW-owned Bangalore franchise to be purchased. The price of Rs 29.5 lakh was paid for the wrestler. From December 10 through December 27, the Pro Wrestling League was to be staged in six cities.

He earned the gold medal in the men’s freestyle 65 kg division at Gold Coast, Australia. He won the gold medal by Technical Superiority over Kane Charig of Wales.

He won the Men’s freestyle 65 kg gold medal on August 19. He won 11-8 over Japanese wrestler Takatani Daichi, after a 6-6 tie in the first round.

At the 2019 World Wrestling Championships, Bajrang took silver. He became World No. 1 in the 65 kg division after winning the Silver Medal.

In the 65 kg freestyle competition. Punia earned Bronze for the second time at a World Championship, qualifying India for the 2020 Olympics in Tokyo.

At the Ranking Series on January 18, Bajrang defeated Jordan Oliver 4-3 in the 65 kg freestyle final.

He secure a silver medal at the 2021 Asian Wrestling Championships after losing to Takuto Otoguro in the final.

On August 6, 2021, he won the pre-quarterfinal match in the 65 kg category in the Summer Olympics 2020 against Ernazar Akmataliev and his quarter-final match against Morteza Ghiasi Cheka.

He dominated his opponent by 8-0 and won the bronze medal. 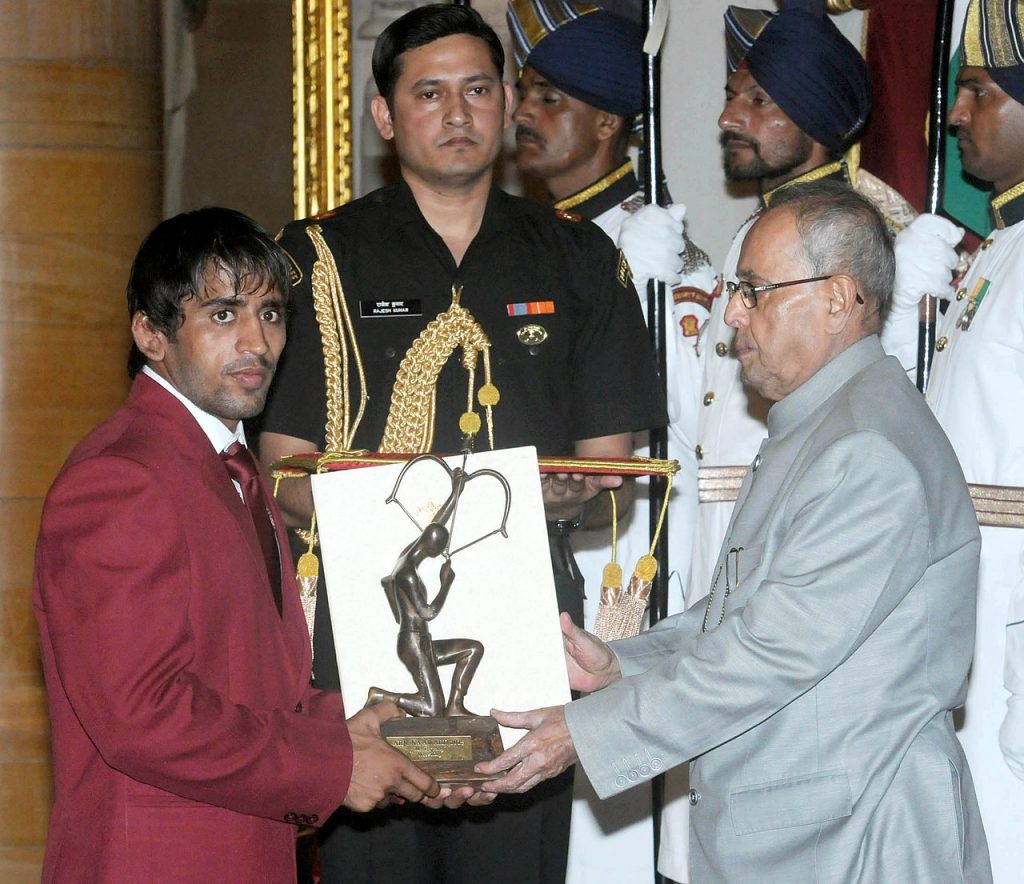 According to Forbes India, Wrestler Bajrang Punia ranked 94 on the list with earnings of Rs 2.4 crore. Punia, who won the Bronze at the 2019 World Wrestling Championships, endorses at least three brands, including Mobil, Asics shoes, and TT underwear. The Bharat Khel Ratna awardee is India’s biggest bet for a medal at the Tokyo 2020 Olympics in the 65-kg weight category.